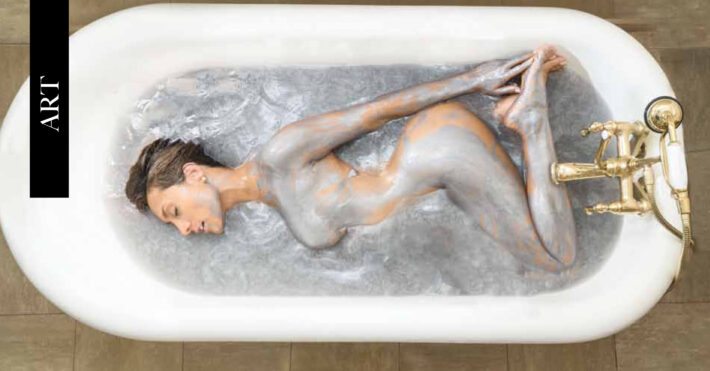 We are afraid of the nude form. We censor the softest parts of ourselves in movies. We see a storm of controversy at the sight of a woman breastfeeding. There are two main reasons we avoid nudity.

One is the legacy of religious shame. The other is because it can feel too vulnerable. That vulnerability is what Senén Llanos, the Puerto Rican painter and photographer, encourages us to love with his camera.

Llanos’ choice of canvas is remarkable. He draws us into the skin. A look at his artwork will introduce you to an array of people whose bodies are covered only in the bright swirls of paint. You can see every hair and goose bump on their bodies. According to Llanos, what makes us human is an “explosion of color and textures”. This explosion combines with the exposure of each subject to paint a picture that contradicts fear. Instead of fear, we celebrate the body.

In his most recent collection, The Bathtub Experience, Llanos combined paint with elements by immersing his models into bathtubs. The comic book-like streaks of paint in their body melt into the water to create a pool of color around them. This collection was presented at the Condado Vanderbilt Hotel in Puerto Rico, where guests could watch him work as he painted a model for the bathtub of the presidential suite. When Llanos creates, he not only is inspired but inspires as well. Llanos writes a blog where he gives us a glimpse into the processes of his work. In his blog, one can read about Elena Laurenti, the model who felt liberated when she accepted her body as Llanos photographed her. One can also read his reflections on the controversy his photography causes. Nudity is clearly still a taboo idea in our culture. That taboo was taken a step further when he published photographs of his wife pregnant and then breastfeeding. The viewers, who argued such images should be private, certainly were missing Llanos’ point. Llanos accepts human flaws vulnerability, sensuality, and desire fearlessly. He encourages us not to shy away from these things but to appreciate that which makes us human. 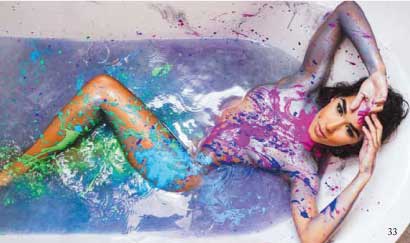 Llanos earned the top prize for the New York Dancer Photography Contest in 2011. He is also the creator of a clothing line named Gotham Skin, which features leggings that have the images of famous landmarks like Grand Central Station on them. Prints of his work from The Pretty Martian Women and The Bathtub Experience collections are available for sale on his website. The Bathtub Experience is also available for viewing by a private appointment in a gallery in Miramar, Puerto Rico. Just like his art, Senén Llanos’ artistic future looks colorful.