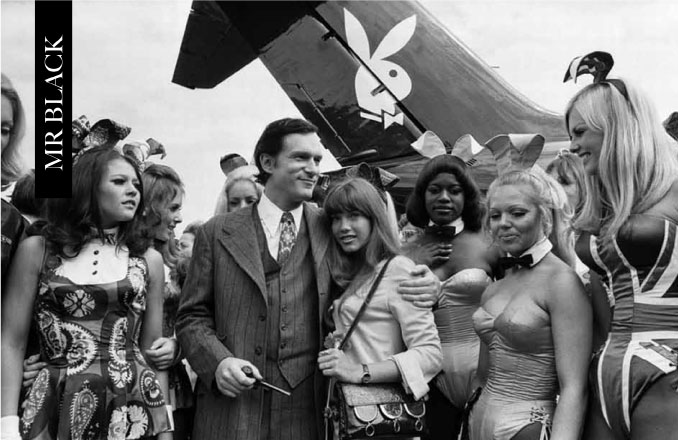 The man behind the Playboy magazine legacy created a universe of sexual freedom and luxury for the modern man. After completing high school during the last months of World War II, he entered the US Army. Once the conflict was over, he graduated with a Bachelor’s degree in Psychology from the University of Illinois. The young artist had a great talent for drawing, and he began a career doing illustrations for ublications such as Children’s Activities and Esquire. 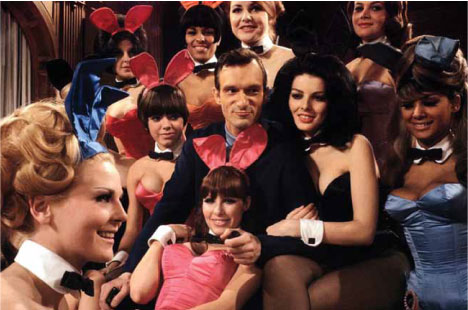 However, he dreamed of creating his own magazine, which he intended to call Stag Party. Such a party is catered specifically toward men. For example, bachelor parties… During this period he discovered a calendar of naked women in a workshop. One of the ladies looked very much like Marilyn Monroe. He hesitated for a moment, but her features were unmistakable. Her body, on a red cloth background, could not go unnoticed, although nobody realized who it was.
We must bear in mind that by the time Hugh discovered this image, Monroe was the most famous woman in the world. The actress had conquered Hollywood and was already regarded as the sex symbol of the second half of the 20th century.
The calendar images had been taken when she was still an aspiring unknown model who had no way to pay the rent. When the photo shoot took place, Marilyn was just around 20 years old and never imagined that she would someday become the most desired woman in the nation. Before Playboy, nudes on print practically did not exist.
It was the 1950s, and this kind of work was considered a taboo associated with pornography. Therefore, the revelation that the world’s most famous woman had posed nude would have been considered a scandal.
Hefner, aware of the treasure he had found, located the photographer and bought the rights.
In December of 1953, when he was only 27 years old, the first edition of Playboy magazine went on sale. Marilyn Monroe graced the cover.
In the issue, he included an editorial written by himself in which he expressed the Philosophy of Playboy. That is the philosophy of sexual and expressive freedom. Against the odds, that first number was literally devoured. Seeing the most famous Hollywood actress au naturel shocked the American public and the
54,000 magazines that were printed sold out. Today, one of those original copies is worth about a million dollars.
That success made Hefner the pioneer of graphic eroticism and the creator of a product that would make sex no longer taboo.
Playboy became one of the most widely circulated magazines in the world and came to be accepted in the homes of American families (usually under a mattress). The famous Playboy logo of a rabbit with an elegant tie was designed by Art Paul for the second edition of the magazine. Today, the rabbit is considered one of the most valuable logos in the world. Playboy became a forum not only for lifestyle but also for excellent journalistic work. Norman Mailer, Ian Fleming, John Dos Passos, Margaret Atwood, Roald
Dahl and many others appeared in its glossy pages. Through the years its extensive interviews were and still are considered iconic. Fidel Castro, John Lennon, Ayn Rand, Salvador Dali, Martin Luther King
Jr., Jean-Paul Sartre, Muhammad Ali, Stephen Hawking Carl Sagan and President Jimmy Carter are just a handful of notable interviewees. Although he was a pure-bred puritan, he confessed that while he was never unfaithful to his wife, he still had lustful thoughts with other women. The magazine was selling more than a million copies a month. In honor of this grand reach, Hefner held the first Playboy Jazz Festival at the Chicago Stadium which became known as the single greatest weekend in the history of jazz.
By the 1960s, Hugh Hefner’s name had become synonymous with the hedonistic lifestyle millions of men lusted over. Not only was the publisher very wealthy, but he was also surrounded by beautiful and sexy young models.
The Playboy Mansion at 1340 North State Parkway was purchased as his new home, and the writer opened the first Playboy Club. Playboy, with its erotic images and interesting articles, became the largestselling men’s magazine in the world. In the 1960s Hefner produced and hosted two short-run television series, ‘Playboy’s Penthouse’ (1959–60) and ‘Playboy After Dark’ (1969–70). In the 1970s the magazine was selling more than seven million copies a month. 23 Playboy Clubs, resorts, hotels and casinos with more than 900,000 members worldwide signaled the immense success the publisher has obtained. The company also owned a record label and a television and motion picture company.
In addition to the women he married, he had sexual relations with several other women. Some of his noted mistresses were Barbi Benton, Brande Roderick, Holly Madison, and Kendra Wilkinson.
Most of them were models working for Playboy. He also experimented with bisexuality. Hugh Hefner died of natural causes at his home, the Playboy Mansion, on 27 September 2017 and his wealth was estimated to have a net worth of $50 million.
By Pedro Lazaro
MR BLACK