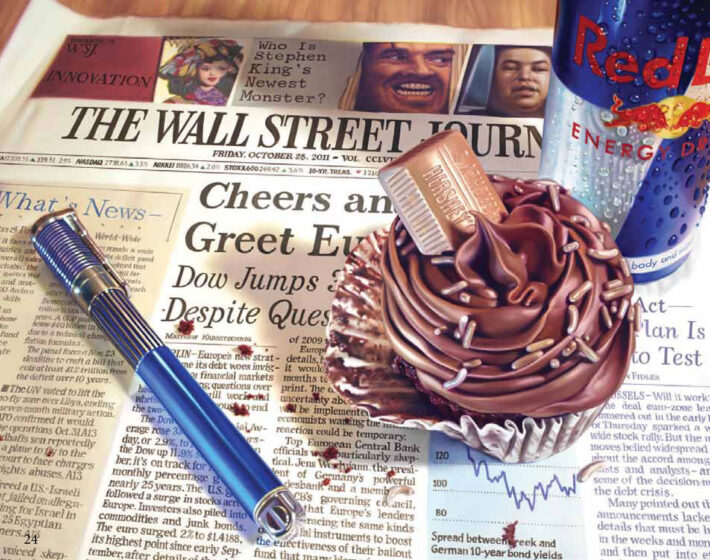 Tell us about your inspiration, art, style and process.

My idol was Duane Hanson. He was a Florida sculptor who produced sculptures of people so life-like that they fooled the eye. When his security guard sculpture was on display at Russeck Gallery in New York, thousands of people, myself included, went up to him and asked him where the restrooms were. It was truly uncanny. 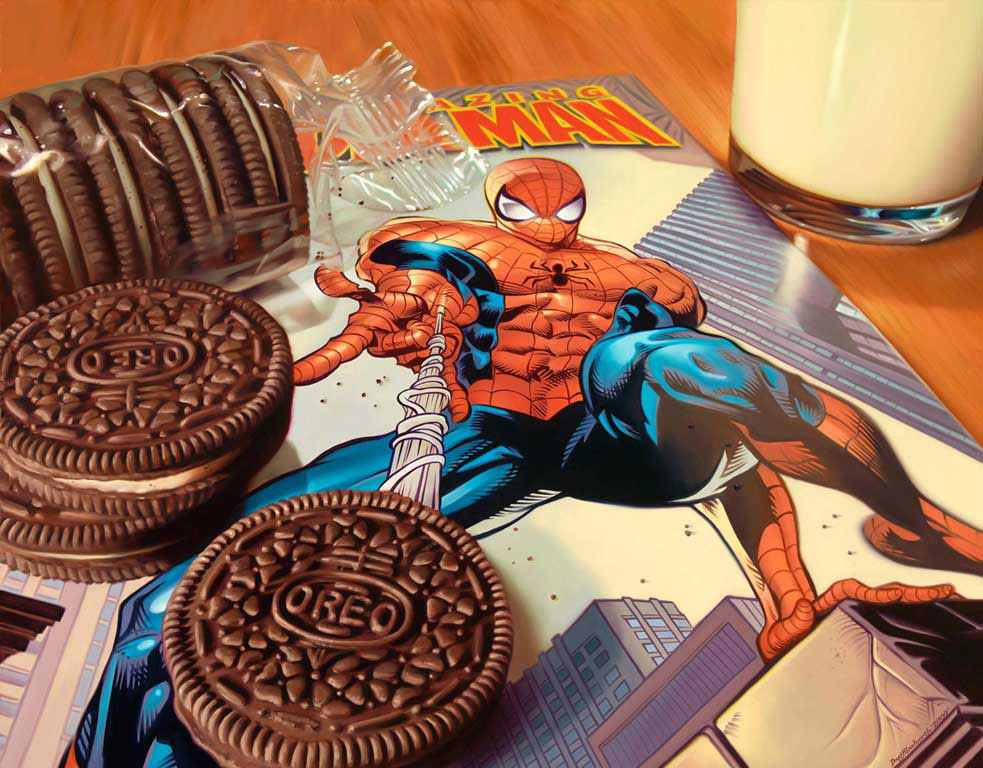 I love when people see my paintings at Foxx Galerie in Zurich and say to one another, “nice photo.” Then Claudine Bandi, the owner, corrects them and tells them it is an oil painting. Their look of incredulity is such a pleasure to watch. Many people stare at the paintings for a very long time. I also enjoy evoking the feelings of nostalgia amongst the viewers. Recently at Monarch Gallery in La Jolla, I overheard a family looking at my Monopoly painting. One (person) said, “I was always the dog” another said, “I was the iron.” At Atlas Galleries in Chicago, I heard a patron exclaim, “Wow! Look at the Kid Cowboy. I had exactly that book when I was a little boy. And the edges of the book were frayed just like it is in the painting.”

How hard is it to build a name in the industry?

One of the biggest challenges an artist faces is getting his work in front of the public. These days, artists pay large amounts to get their works on gallery walls. I have been so fortunate to have been “found” by Ron Hoy, the owner of Hoypoloi Gallery in Orlando’s Downtown Disney. The great thing about Hoypoloi Gallery – and its sister gallery, Pop Gallery, also in Downtown Disney, is that more than half a million people walk by the door each week. They are introducing my artwork to a myriad of collectors, and I am so grateful for it. During Labor Day weekend, I painted live at the Pop Gallery and there was a line around the corner to get postcards signed and remarques done. What a great scene that was! 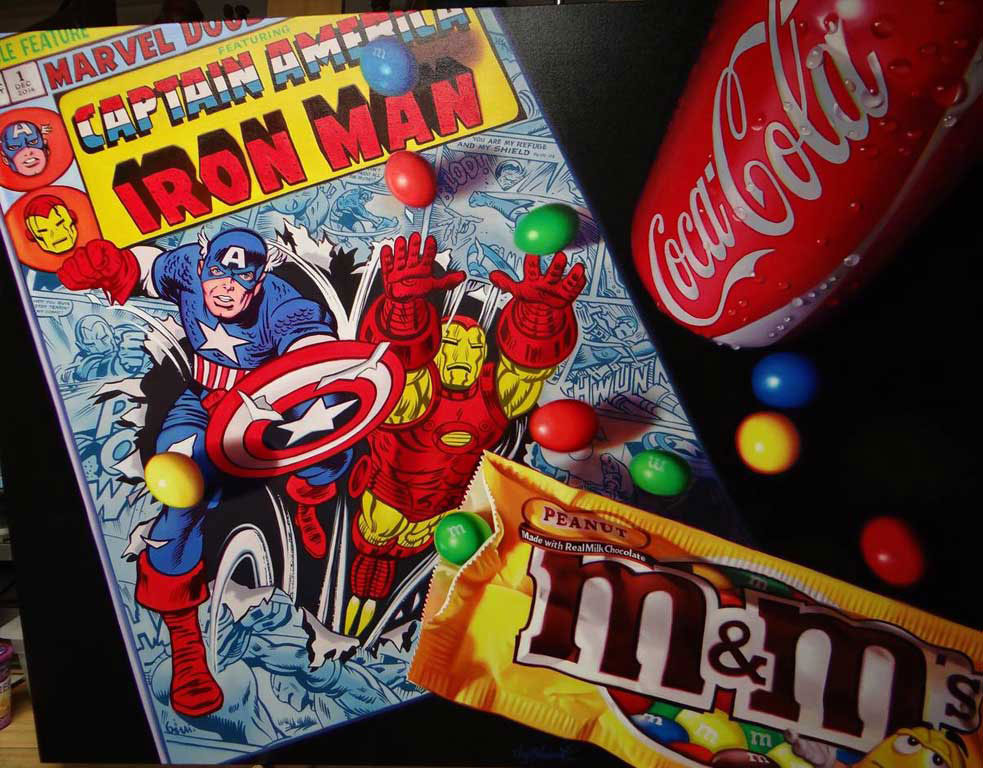 What type of people collect your work?

Photorealism is a genre or art which can be appreciated and loved by the novice as well as the refined collector. I am hoping that the art form, along with the nostalgia that my paintings evoke, draws interest from a wide group of collectors and potential collectors who happen to be walking by a gallery that sells my works.

What would be a success for you?

I would love for more and more people to become devotees of photo realism. One of my great successes is being awarded a position as a gallery artist at Art Gone Wild Gallery on Duval Street in Key West. Each day, thousands of people get off the cruise ships and walk up Duval Street. Most of those people have never been exposed to photo realism. D. Arthur Wilson, the owner of the gallery, explains to these people what my art is all about, and it is amazing how many pieces of mine they sell every week. I love D. Arthur and his wife Lisa, and I love Key West and Duval Street. 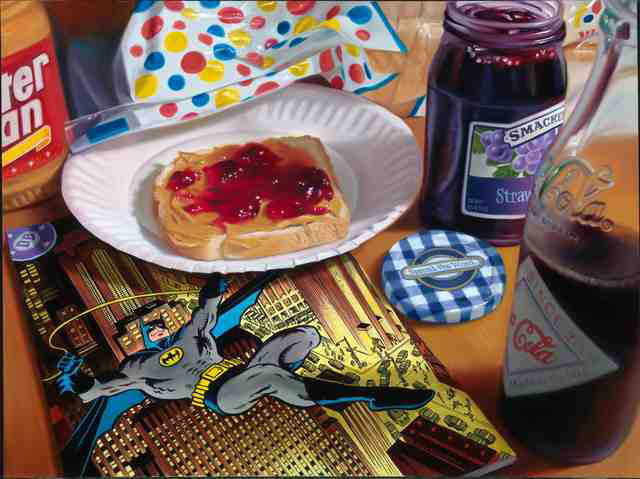 What about seasoned art collectors? Are they interested in your work?

This is where I have to express my sincere appreciation to Howard Russeck, the owner of Russeck Gallery on Worth Avenue and of Russeck Gallery in Soho in Manhattan. These two galleries are filled with original oil paintings by Picasso, Joan Miro, Alexxander Calder, Wassily Kandinsky and the like, and now they also have original Doug Bloodworth paintings. I know that I certainly do not belong in a gallery of this caliber but I am thankful to Howard Russeck and Sloane Russeck that they have decided to showcase my paintings, and of course I am thankful that they have sold so many of my paintings to renowned clients. 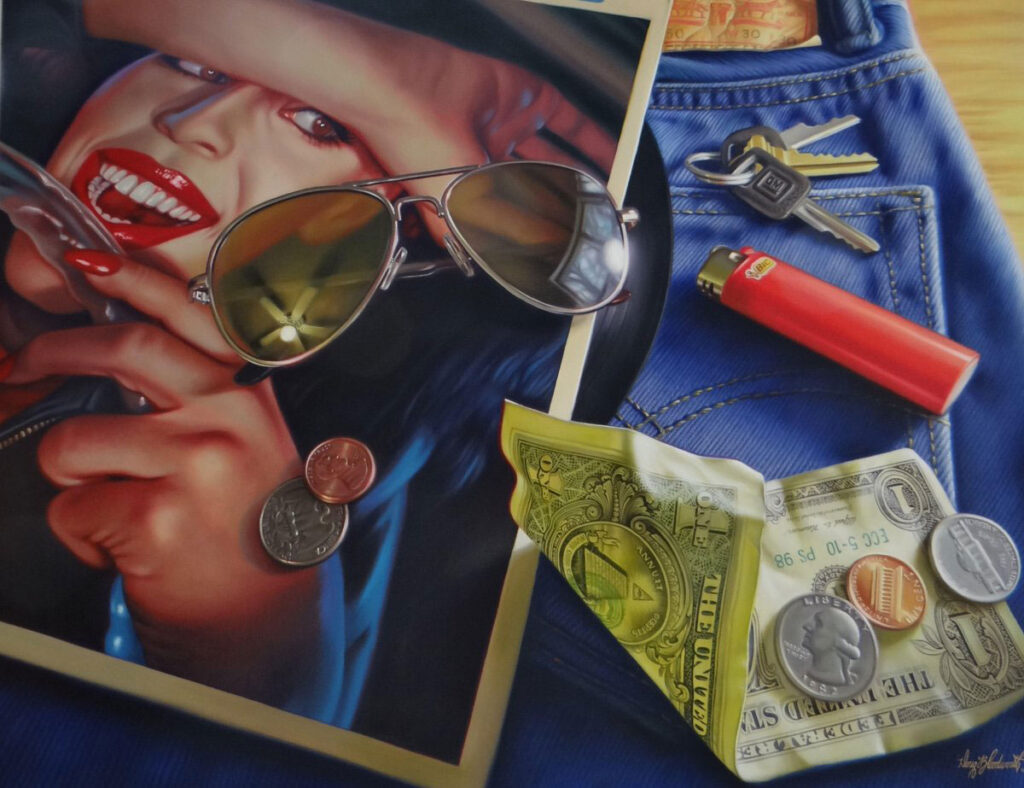 How have you decided on subject matter?

My father was in the military and we moved around a lot. I was born on a United States military base in the Philippines and also spent time in Hawaii as a child. As such, I spent a lot of time watching kids’ television and reading comic books. As an adult, I love depicting these nostalgic images in my paintings. It seems to resonate with viewers as well. Recently, I was visiting the Celebrites Gallery in Maui, Hawaii, which showcases my paintings, and I overheard a couple talking about the painting with the Superman comic, the potato chips and the soft drink. The husband said, “Wow, that’s me as a kid!” And the wife bought the piece for him!

How did you learn to do what you do?

I studied fine arts in college and earned a degree in Commercial Arts. I started with caricatures, which to this day I enjoy. Then I was fortunate to be introduced to Marv Gunderson, the late worldfamous billboard artist. I worked under Marv for several years, painting outdoor billboards half the size of an Olympic pool. Most of the billboards were for Marlboro cigarettes, although we painted other billboards as well for McDonalds, Budweiser and others. Each billboard took a whole team of us about two weeks to complete. 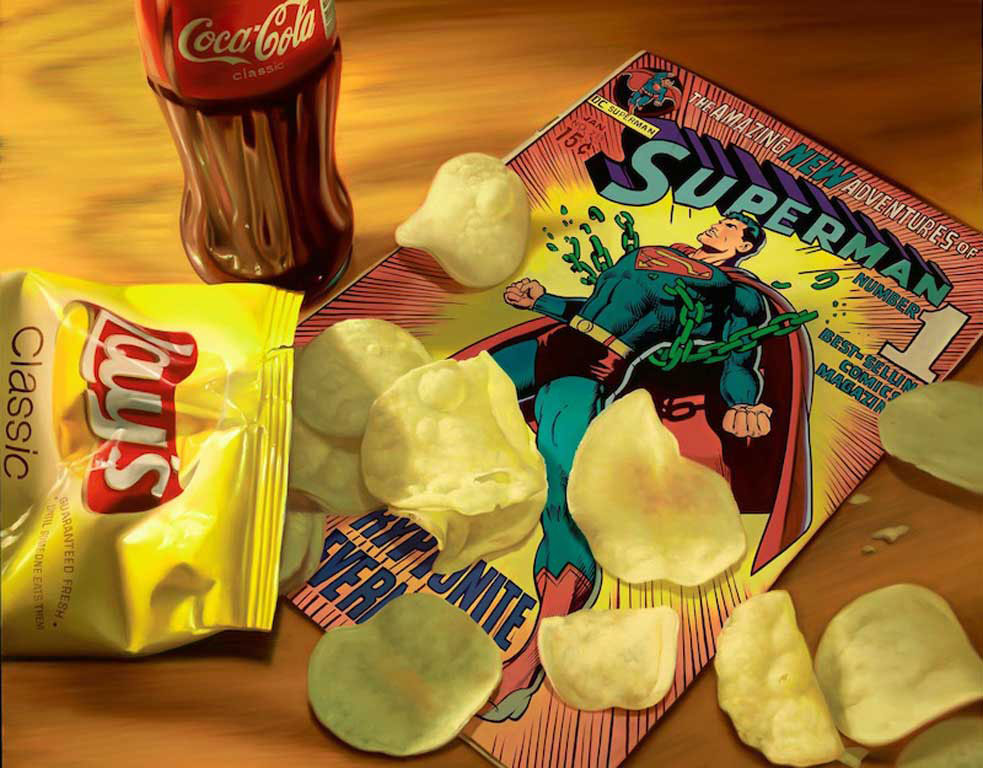 However, after three months or so of being in view, the billboards were whitewashed to make space for a new ad for a new client. I was dismayed to see our hard work disappear. I then painted two 30 foot by 200 foot murals at Tampa’s Tropicana Field, a project which took six months to complete and inspired me to focus solely on painting fine art pieces. I derive so much pleasure from the enjoyment others get from seeing my work.

What role does Miami play in your career?

Miami has a special place in my heart for two reasons. The first is that my first five paintings were initially shown at Art Basel in 2011. A famous collector from Mexico City bought three of the paintings and a collector from Palm Beach bought the other two. This made me realize how important December in Miami can be for an artist’s career. The second reason is because of the great support I have received from Oliver Nicolis, the owner of Effusion Gallery on South Beach. The great thing about Effusion Gallery is that, being right next door to the Versace Mansion, and with my paintings right in the front window, there are literally thousands of people who see my artwork every day. I give sincere thanks to Oliver: he has believed in me from day one, and I am grateful for it. 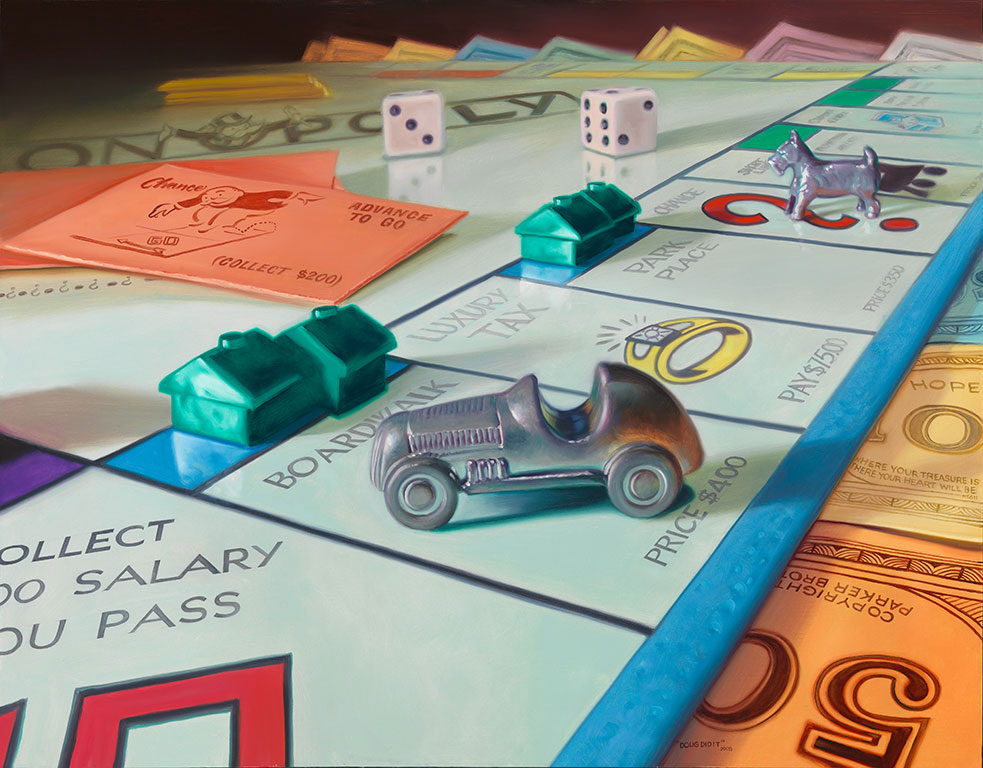 Recently, Lil Wayne came into Effusion Gallery and bought my New York Times painting. I was honored that Lil Wayne would like one of my pieces enough to buy it. This is an opportunity that I would have never received without Oliver.

What advice would you give aspiring artists? Stay holed up! I spend 10 hours a day in my studio in Lady Lake, working on perfecting the craft. A photo realist painting in the size I create them – 4 feet by 5 feet – can take me over two months to complete. But it is a labor of love.